3D
Scan The World
3,524 views 136 downloads
1 collection
Community Prints Add your picture
Be the first to share a picture of this printed object
0 comments

Canon Finch (1663–1738) was the brother of Daniel Finch, one of Rysbrack’s earliest patrons, whose bust is also in the Museum collection (Museum no. A.6-1999). Unlike the bust of his brother, Canon Finch is depicted in contemporary dress. This bust resembles another, in marble, of the sitter on the monument to Canon Finch and a third brother, Dean Finch, in York Minster.

Rysbrack was born in Antwerp, but moved to London in 1720, where he remained for the rest of his life. He became one of the most influential sculptors working in England in the first half of the 18th century. His work concentrated on portrait busts such as this, and funerary monuments. He also produced garden sculpture, including the Saxon gods for Stowe, in Buckinghamshire. Two of these, Thurner (A.10-1985) and Sunna (A.2-1997) are also in the V & A’s collection. 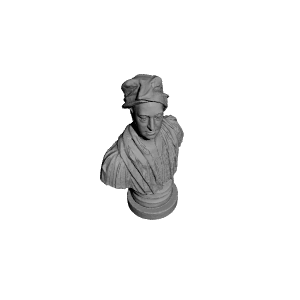 ×
1 collections where you can find Canon Edward Finch by vam