The title, Cantate Domino ('O Sing unto the Lord'), indicates the overtly religious nature of thissculpture. This fits with a wider pattern in Barbara Hepworth's work in the 1950s, associated with both personal and public issues, and was made manifest in the rising form of the sculpture.Cantate Domino is based on two diamond shapes formed in depth by flat planes so that they are open front and back. The structure of the lower diamond is more bulky and compressed, while the top of the upper diamond opens out at the points. The composition almost exactly matches the slightly shorter Ascending Form (Gloria), 1958 (BH 239, artist's estate, repr. Hodin 1961, pl.239), which has an additional back plate (pierced by a circle) sealing the upper form.

The sculpture was made for casting following Hepworth's established method of constructing an armature in expanded aluminium. This allowed for the production of the flat independent planes to which the plaster was applied. Brian Wall, who was an assistant of Hepworth's at the time, recalled that the outline was established first, then the inner strip passing between the diamonds, and finally the deep U-shape between the upper arms (interview with the author, 3 May 1996). A cast was made at the Art Bronze Foundry in Fulham and exhibited in 1958; further casting was underway in March 1959 (invoice, 10 March 1959, TGA 965). The inner strip was joined to the left hand side in the process of casting; according to Wall, Hepworth was unhappy about the closure of this gap (interview, 3 May 1996). The weight of the upper section caused structural problems. A welded joint at the waist of one copy (1/6) was found to be broken on arrival for Hepworth's first New York exhibition in late 1959 (letter Hepworth to Peter Gimpel, 24 Sept. 1959, TGA 965); this seems to have been the same cast which required repair at the foundry on its return from the British Artist Craftsmen exhibition which toured America (letter from Hepworth's secretary, Margaret Moir, to Peter Gimpel, 27 April 1961, TGA 965). Brian Wall also recalled repairing a cast (interview, 3 May 1996). The artist's copy, which came to the Tate, spent eight years in the studio garden (1959-67). It has a chalky surface over brown, possibly a result of the oxidisation of the bronze or of Hepworth's reputed use of sour milk in order to achieve a white patination (Tate Gallery Conservation Report).

Several commentators have remarked on the thrust of the composition. Michael Shepherd wrote that:

the resilience of the metal, and the organic spring which recalls the uncurling tendrils from a seed, unite with the upwards stretch like that of upstretched open hands. Thus a multiplicity of references from figurative associations, together with the work's own essential and abstractnature, come together to form an independent spiritual unity.
(Shepherd 1963, [p.39])

This figurative interpretation was also taken up by Mullins. He calls it 'even more exultant' thanAscending Form, (Gloria), adding that they 'represent a free stylisation of the human hand raised in supplication and praise' ('Barbara Hepworth', Barbara Hepworth Exhibition 1970, exh. cat., Hakone Open-Air Museum, Japan 1970, unpag.). In this way the reflected forms may evoke hands in prayer, such as those in Albrecht Dürer's famous Study of Hands, 1508 (Albertina, Vienna, repr. Walter L. Strauss, The Complete Drawings of Albrecht Dürer, vol.2: 1500-1509, New York 1972, p.1033).

Although Hepworth herself did not specify such a literal interpretation, Mullins's assessment - culled from conversations with her - does reflect her general view of the spirituality of her work and sculpture in general. Writing to Herbert Read of the sculptures in the British Museum, she asserted: 'Only a society in a state of affirmation can produce sculpture - a primitive society or one fighting for its existence ... on the basis of active belief in both the virility of nature & the spiritual ascendancy of man' (18 Jan. 1953, Sir Herbert Read Archive, University of Victoria, B.C.). The latter she equated with 'a religious sensibility', adding: 'In an art [sculpture] which is intrinsically bound up with the understanding of natural forces, & an art which depends on virility of life & movement even for its comprehension, you have to look for a dynamic inter-play in society itself' (ibid.). Such an understanding of sculpture, as resulting from the conjunction of social and spiritual energies in a period of crisis while drawing on the latent forces of nature, was central to Hepworth's faith in the relevance of art. This confidence was strengthened in adversity, as she later told Mullins that outside events supplied 'the moral climate in which my sculpture is produced' ('Barbara Hepworth', Barbara Hepworth Exhibition 1970, exh. cat. Hakone Open-Air Museum, Japan, 1970 unpag.).

In Cantate Domino the response was specifically religious, as the title is the opening phrase of Psalm 98. Hepworth may also have recognised in this text her concerns with the landscape: 'Let the sea roar, and the fullness thereof; the world and they that dwell therein; Let the floods clap their hands; Let the hills be joyful together before the Lord' (Psalm 98:7-9). This conjunction was reinforced by photographs of the sculpture seen in front of the tower of St Ives Parish Church and in the countryside (Hodin 1961, pl.244). Soon after completion, it was exhibited in the 'Altar Furniture and Religious Sculpture' section of British Artist Craftsmen (1959-60); once acquired by the Tate, Hepworth wrote to the Director Norman Reid: 'It was intended to be reserved as a Headstone for my grave in St Ives ... I only mention this because I have always considered this a religious work' (27 Nov. 1967, Tate Gallery Acquisitions files).

Other works combined references to religious music with vertical forms, notably Ascending Form (Gloria) and the contemporary carving Figure (Requiem), 1957 (BH 230, Estate of the artist, repr. Hodin 1961, pl.230). They were the most abstract manifestation of a renewed spirituality in her work following the traumas of the death of her son, Paul Skeaping, in 1953 and the definitive separation from Ben Nicholson, with his marriage to Felicitas Vogler in 1957. In 1954, she carved a Madonna and Child for St Ives Parish Church (BH 193, repr. Hodin 1961, pl.193) which, together with the painting Two Figures (Heroes) (Tate Gallery T03155), served as a memorial to her son. The realism of this work stands in contrast to Cantate Domino, and may be seen in relation to Hepworth's earlier disenchantment with Henry Moore's Northampton Madonna, 1943-4 (St Matthew's, Northampton, repr. David Sylvester, Henry Moore Volume 1 Sculpture and Drawings: 1921-48, 1949, p.140, LH 226), which she had considered 'smug' and as using 'sentiment as a substitute for strength' (letter to Herbert Read, [30 Dec. 1946], Sir Herbert Read Archive, University of Victoria, B.C.). By contrast, the abstract Cantate Domino andAscending Form (Gloria) used a formal language which was integral to the stylistic concerns of her contemporary sculpture. In 1969-70 (when a spillage from the oil tanker Torrey Canyon threatened the Cornish coast) she told Mullins:

My sculpture has often seemed to me like offering a prayer at moments of great unhappiness. When there has been a threat to life - like the atomic bomb dropped on Hiroshima, or now the menace of pollution - my reaction has been to swallow despair, to make something that rises up, something that will win. In another age ... I would simply have carved cathedrals.
(ibid.)

These more public crises were the subject of much post-war sculpture and provide a further context for Cantate Domino. In Rotterdam - a city almost completely flattened by wartime bombing - Ossip Zadkine's The Destroyed City, 1946-53 (Leuvesluis, Rotterdam, repr. Gaston-Louis Marchal, Ossip Zadkine: La Sculpture ... Toute la vie, Rodez, 1992, p.121) addressed themes of suffering and regeneration through a figure with uplifted arms. This appears to be indebted directly to Rodin's Prodigal Son, c.1889 - which Read illustrated in The Art of Sculpture, 1956 (repr. pl.189); both take the very pose which is sometimes recognised in Hepworth's sculpture. Soon after, Naum Gabo built the Bijenkorf Construction, 1956-7 (N.V. Magazijn De Bijenkorf, Coolsingel, Rotterdam, repr. Steven A. Nash and Jörn Merkert, Naum Gabo Sixty Years of Constructivism, exh. cat. Dallas Museum of Fine Art, 1985, p.42, fig.50, no.67.5), also in Rotterdam. This took to a monumental scale his simpler submission for theUnknown Political Prisoner competition in 1952 (e.g. Model for a 'Monument to the Unknown Political Prisoner', 1952, Tate Gallery T02187, repr. ibid. p.127, pl. 45, no.61.2), which raised up finely tapering bows. Hepworth knew this work as she was a fellow prize-winner in the competition. Beyond the formal similarity of the open rising form, the asymmetry and organicism of Cantate Domino establishes a human dimension and scale more personal than Gabo's monument.

In making the selection of works to be submitted to the São Paolo Bienal in 1959, the British Council's Lilian Somerville preferred Cantate Domino to the contemporary carving Figure (Nanjizal) (Tate Gallery T00352), which Hepworth herself was keen to send (Festing 1995, p.238). The bronze may have been preferred for the practicalities of travel; in any case, Hepworth's award of the International Prize followed and a cast (3/6) was acquired for the Museu de Arte Moderna São Paolo. Another cast is in the Middelheimpark in Antwerp (4/6). As Hepworth told Norman Reid, she intended Cantate Domino for her grave but local by-laws ensured that 'it was pointedly refused on account of it being too high' (27 Nov. 1967, Tate Gallery Acquisitions files), the limit being two feet six inches (Festing 1995, p.305). The artist's cast had passed to the Tate before this decision was reversed; her grave is marked with a simple stone and a cast of Ascending Form (Gloria) is now placed at the entrance to Longstone Cemetery, Carbis Bay. 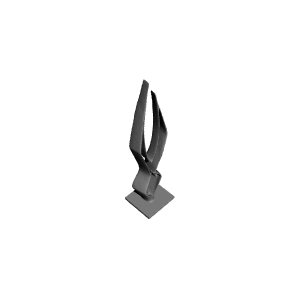 ×
6 collections where you can find Cantate Domino by Scan The World
×
jimflc
@jimflc
1
Printed on: Creality CR-10
Material: PLA
Posted at: 02nd April 2020