3D
Scan The World
1,253 views 59 downloads
Community Prints Add your picture
Be the first to share a picture of this printed object
0 comments

This relief sculpture is typical of the Renaissance for a few reasons. The most striking one is the theme: young children dressed in draped clothing, quite similar to the putti, representing the Roman god Cupid. Their curly hair and round features are also aesthetics that may be found in ancient Greek and Roman sculpture. The second one is the technique: Luca della Robbia here used the stiacciato technique, which consists of different levels of depth in the digging of the stone. Thus it enables the sculptor to give perspective to his work: the spectator can distinguish a firstground with the first row a children, and a background with the row of children behind the first one. This technique was developped with the growing interest for perspective during the Renaissance. 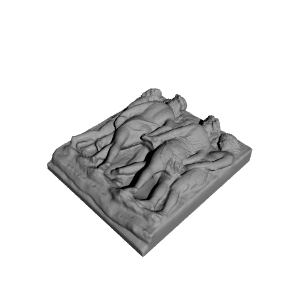 ×
0 collections where you can find Cantoria by Scan The World