3D
360°
Featured Scan The World
1,817 views 305 downloads
4 collections
Community Prints Add your picture
Be the first to share a picture of this printed object
0 comments

This is one of a series of finely carved reliefs by Baccio Bandinelli (1493 - 1560), made to line the Cathedral sanctuary (or 'choir') of the Santa Maria del Fiore - the third largest church in the world (after St. Peter's in Rome and St. Paul's in London). The epic eighty-six reliefs were commissionedby Cosimo I de'Medici to modernise the cathedral in accordance with the Mannerist taste of that era.

Each relief depicts a different saint, representing male personages clothed in antique garb or nude. The identity of these men is unclear, but - like the figures painted forty years earlier by Michelangelo on the Sistine Chapel ceiling - they probably represent patriarchs and prophets of Israel and Greco-Roman heroes. The meaning of the choir sculptures was completed by the mural done on the inner shell of the dome.

Bandinelli was an able sculptor and a shrewd court follower, but his tendency to please his patron often prevented him from rising to the heights of truly great art. His style took its oversized aspects from Michelangelo, but his interpretation focused on massive muscular bodies rather than abstract heroic ideas. 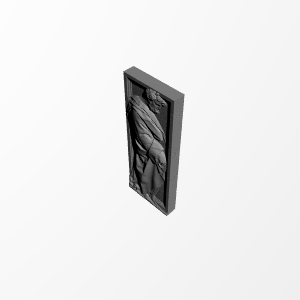 ×
4 collections where you can find Caped man, Prophet? by SMK - Statens Museum for Kunst