3D
Scan The World
3,287 views 262 downloads
4 collections
Community Prints Add your picture
Be the first to share a picture of this printed object
0 comments

On this highly complex triple-capital, the sculptor has placed several scenes that continue around the bells of varying degrees of unity. On the largest side, Judas arrives in the Garden of Gethsemane followed by soldiers who have come to arrest Christ. Judas identified Jesus with a kiss. To the left of this scene, the enraged disciple Peter slices the ear of Malcus, servant to the high priest.

After an initial appearance before the Sanhedrin (religious court), Jesus is taken before the governor of Judea, the Roman procurator Pontius Pilate. Seated upon a throne, Pilate endorses the death sentence pronounced by the religious authorities (on the two opposite bells) "Ecce Homo". The episode of the Flagellation immediately ensues. Bound to a column, Jesus is whipped by two executioners. According to Roman law, he is then made to carry his cross to the site of his execution (on the third bell). 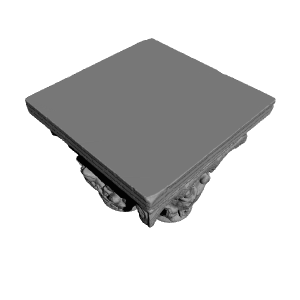