Capital - The Transfiguration and The Doubting Thomas

3D
Scan The World
2,012 views 91 downloads
1 collection
Community Prints Add your picture
Be the first to share a picture of this printed object
0 comments

Capital - The Transfiguration and The Doubting Thomas

The scene of the Transfiguration unfolds over three sides. In the company of Peter, James and John, Jesus goes to pray in the mountains and reveals his divine nature to these disciples there. Seized with terror, the disciples fall prostrate before him as they witness the conversation of Christ Glorified with Moses and Elijah, representign the Old Convenant and the Prophets. Peter suggests that three tents be made, represented on the right by three towers, for Christ, Moses and Elijah respectively.

The inscription "TRANSFIGURACIO D(OMI)NI" identified the scene. Thomas' disbelief appears on the fourth side. Absent when Jesus first appeared to the apostles, Thomas remains sceptical. Jesus appears to him eight days later. Uncovering the wound on his right side, he invites the kneeling Thomas to touch it as proof that he has risen. 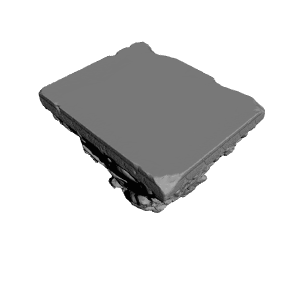