LeChuck is a fictional character in the Monkey Island series of graphic adventure games. Created by Ron Gilbert for LucasArts, LeChuck was introduced in The Secret of Monkey Island, and is the chief antagonist of the series. Gilbert drew on aspects of the characters in the 1988 novel On Stranger Tides for his concept for LeChuck.

An undead pirate captain, LeChuck is obsessed with pursuing the affections of the series' heroine, Elaine Marley, and exacting revenge upon protagonist Guybrush Threepwood, who is responsible for consistently thwarting his plans and on some points he is depicted as being Guybrush's brother. LeChuck is not limited to one incarnation; across the series, the character has been depicted as a ghost, a zombie and a demon among other forms. While sometimes gullible and naïve, LeChuck is a powerful and intelligent villain, making extensive use of voodoo magic in his megalomaniacal plans. The character was very well received by video game critics. 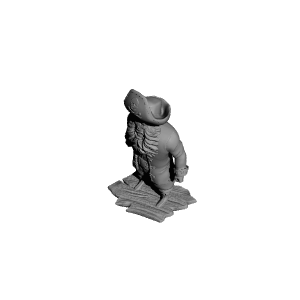 Amazing Captain Le Chuck. i Made one. very nice. congratulations.

Needs some painting, but looks already nice in lime-green ^^

Loved to print this and Guybrush as well. Would love to see more classic LucasArts adventure game models in the future if possible :) LeChuck printed at 0.1 LH in black PLA. Guybrush printed at 0.2 LH will paint tommorow.

My own attempt, happy with the outcome. Acrylic Paints, Black Marker, Pencil. Printed on Polysmooth PVB and smoothed for 50min. Had problem with supports so printed in two halves and glued together.

A few more at 40 micron on a Wanhao D7. Monocure clear resin on the left, the other two are Wanhao Gray.

thanks a lot Fotis, I love Monkey Island and these 3d models are superb, you did an awesome job! I really enjoyed painting them too! thanks a lot!

cant wait to give it a descent paint job

this is my lame try for a paint job, not even close to the skill i see here, please share some tips, i'm struggling here :)

Scaled and add a Base to fit for the Freebooters Fate Tabletop. Thanks Great Work ... please more Lucas Arts Characters like Sam & Max

Ready for painting ... many thx for the cool model

Thank you for this awesome model!!

Lovely model - thanks for sharing!

Thank you for making this model available. I'm new to painting minis and this was a friendly entry point for me since I'm such a fan of the Monkey Island games. It was great inspiration to play around with my new paint set.