3D
Scan The World
6,141 views 507 downloads
1 collection
Community Prints Add your picture
Be the first to share a picture of this printed object
1 comments

Carlos Drummond de Andrade (October 31, 1902 – August 17, 1987) was perhaps the most influential Brazilian poet of the 20th century. He has become something of a national poet; his poem "Canção Amiga" ("Friendly Song") was printed on the 50 cruzados bill. He is considered to be among the greatest Brazilian poets of all time. This bench was created along the beach, facing outwards to invite visitors to sit beside him. 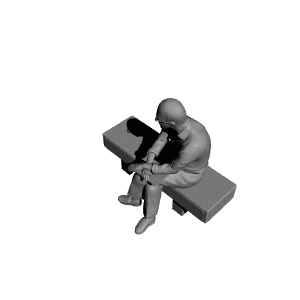