3D
Scan The World
2,766 views 153 downloads
Community Prints Add your picture
Be the first to share a picture of this printed object
0 comments

From the detailing on the base of the sculpture it can only be assumed that the sculpture was commissioned for Victor Emmanuel II (14th March 1820 - 9th January 1878). He was the King of Sardinia from 1849 until 17th March 1861, when he was assumed the title King of Italy to become the first King of a united Italy since the 6th century, a title he held until his death in 1878. The Italians gave him the epithet ´Father of the Fatherland´.

The sculpture is signed by Professor Giuseppe Lazzerini di Carrara Pensionato, and the data Fece in Roma. L´anno. 1859. 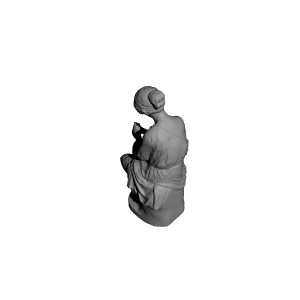 ×
0 collections where you can find Young Maiden Threading a Garland in Florence, Italy by Scan The World