Caryatid from the Erechtheion

3D
Scan The World
4,380 views 625 downloads
5 collections
Community Prints Add your picture
Be the first to share a picture of this printed object
0 comments

Caryatid from the Erechtheion

This figure stood in a row of four, the second from the left. She ressembles the girls in the processionn of the east frieze of the Parthenon. Caryatids were column carved in the form of female figures. This is one of six caryatids that held up the roof of the Erechtheion. She wears a peplos pinned on each shoulder. Her hair is braided and falls in a thick rope down her back. She probably held a sacrificial vessel in one of the missing hands. The figure strongly resembles the women of the east frieze of the Parthenon, which had just been completed when work on the Erechtheion began. She carries an architectural capital like a basket on her head. The weight she bears is taken on the right leg, encased in perpendicular folds. The other leg is flexed with the drapery moulded to it. 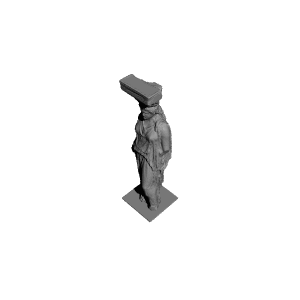