Cast of a Magical Stela

3D
Scan The World
1,508 views 65 downloads
1 collection
Community Prints Add your picture
Be the first to share a picture of this printed object
1 comments

Cast of a Magical Stela

This smaller artefact is possibly a copy of the top half of a Magical Stela. The original, located at The Metropolitan Museum of Art (50.85), in its entirety records thirteen magical spells written in hieroglyphs. The spells protect against poisonous bites and wounds and to cure the illnesses caused by them. The stela was commissioned by the priest Esatum to be set up in the public part of a temple.

This work depicts Horus emerging from the background; the depiction, in high relief, gives the effect that it is a statue separate to the main stele. He is portrayed in the conventional Egyptian form for youth: that is, he is nude and wearing his hair in a sidelock. The soft, rounded forms of the bodies of Horus and the other deities are typical of the style of the period.

To symbolize his magic powers, Horus holds snakes and scorpions as well as an antelope (by its horns) and a lion (by its tail) in his closed fists. His feet rest on two crocodiles. Above him is the head of Bes, the dwarf deity with leonine features who had traditionally protected households but by this time had become a more general protective deity. Horus is flanked by three deities who stand upon coiled snakes. On the right is Thoth, identified by his ibis head, and on the left is Isis. Both protectively hold the walls of a curved reed hut, a primeval chapel, in which the Horus child stands together with a figure of Re-harakhty, god of the rising sun, and two standards in the form of papyrus and lotus columns. The lotus standard supports the two feathers of Osiris's headdress.

The images incised into the stone at the top of the stela portray the perilous nighttime journey of the sun as it passes through the nether world under the earth. Its rebirth each morning is shown at the uppermost point of the stela, where Thoth, four baboons, and the kneeling King Nectanebo II lift their arms in the gesture of adoration and prayer. Nectanebo II was the last indigenous king of ancient Egypt. He struggled valiantly against the Persian empire only to be defeated in the end. After the lost battle, he fled to Upper Egypt, and nothing is known about his end. 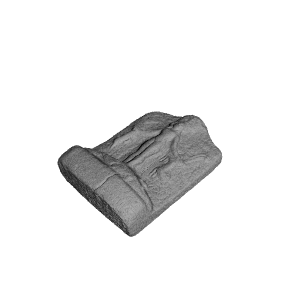