Cast of a Woman at The Pompeii Antiquarium, Pompeii

3D
Scan The World
4,800 views 331 downloads
3 collections
Community Prints Add your picture
Be the first to share a picture of this printed object
0 comments

Cast of a Woman at The Pompeii Antiquarium, Pompeii

"The eruption of Mount Vesuvius in 79 AD was one of the most catastrophic and infamous volcanic eruptions in European history. Historians have learned about the eruption from the eyewitness account of Pliny the Younger, a Roman administrator and poet. Mount Vesuvius spewed a deadly cloud of volcanic gas, stones, and ash to a height of 33 kilometres (21 mi), ejecting molten rock and pulverized pumice at the rate of 1.5 million tons per second, ultimately releasing a hundred thousand times the thermal energy of the Hiroshima bombing. Several Roman settlements were obliterated and buried underneath massive pyroclastic surges and ashfall deposits, the most well known being Pompeii and Herculaneum. The number of deaths is difficult to evaluate. The remains of about 1500 people have been found at Pompeii and Herculaneum, but it is not known whether they represent a small or a large part of the overall deaths.

Reconstructions of the eruption and its effects vary considerably in the details but have the same overall features. The eruption lasted for two days. The morning of the first day, August 24, was perceived as normal by the only eyewitness to leave a surviving document, Pliny the Younger, who at that point was staying at Misenum, on the other side of the Bay of Naples about 30 kilometres (19 mi) from the volcano, which may have prevented him from noticing the early signs of the eruption. He was not to have any opportunity, during the next two days, to talk to people who had witnessed the eruption from Pompeii or Herculaneum (indeed he never mentions Pompeii in his letter), so he would not have noticed early, smaller fissures and releases of ash and smoke on the mountain, if such had occurred earlier in the morning. Around 1:00 p.m., Mount Vesuvius violently exploded, throwing up a high-altitude column from which ash began to fall, blanketing the area. Rescues and escapes occurred during this time. At some time in the night or early the next day, August 25, pyroclastic flows in the close vicinity of the volcano began. Lights seen on the mountain were interpreted as fires. People as far away as Misenum fled for their lives. The flows were rapid-moving, dense, and very hot, knocking down wholly or partly all structures in their path, incinerating or suffocating all population remaining there and altering the landscape, including the coastline. These were accompanied by additional light tremors and a mild tsunami in the Bay of Naples. By evening of the second day the eruption was over, leaving only haze in the atmosphere through which the sun shone weakly.

Pliny the Younger wrote an account of the eruption:

Broad sheets of flame were lighting up many parts of Vesuvius; their light and brightness were the more vivid for the darkness of the night... it was daylight now elsewhere in the world, but there the darkness was darker and thicker than any night.

By 2003 around 1,044 casts made from impressions of bodies in the ash deposits had been recovered in and around Pompeii, with the scattered bones of another 100. The remains of about 332 bodies have been found at Herculaneum (300 in arched vaults discovered in 1980).What percentage these numbers are of the total dead or the percentage of the dead to the total number at risk remain completely unknown.

Thirty-eight percent of the 1044 were found in the ash fall deposits, the majority inside buildings. These are thought to have been killed mainly by roof collapses, with the smaller number of victims found outside buildings probably killed by falling roof slates or by larger rocks thrown out by the volcano. This differs from modern experience, since over the last four hundred years only around 4% of victims have been killed by ash falls during explosive eruptions. The remaining 62% of remains found at Pompeii were in the pyroclastic surge deposits, and thus were probably killed by them. It was initially believed that due to the state of the bodies found at Pompeii and the outline of clothes on the bodies it was unlikely that high temperatures were a significant cause. But in 2010, studies indicated that during the fourth pyroclastic surge – the first surge to reach Pompeii – temperatures reached 300 °C (572 °F). Volcanologist Giuseppe Mastrolorenzo, who led the study noted that "(It was) enough to kill hundreds of people in a fraction of a second". In reference as to why the bodies were frozen in suspended action, "The contorted postures are not the effects of a long agony, but of the cadaveric spasm, a consequence of heat shock on corpses."

Herculaneum, which was much closer to the crater, was saved from tephra falls by the wind direction, but was buried under 23 metres (75 ft) of material deposited by pyroclastic surges. It is likely that most, or all, of the known victims in this town were killed by the surges, particularly given evidence of high temperatures found on the skeletons of the victims found in the arched vaults, and the existence of carbonised wood in many of the buildings.

These people were all caught on the former seashore by the first surge and died of thermal shock but not of carbonization, although some were partly carbonized by later and hotter surges. The arched vaults were most likely boathouses, as the crossbeams in the overhead were probably for the suspension of boats. No boats have been found, indicating they may have been used for the earlier escape of some of the population. The rest were concentrated in the chambers at a density of as high as 3 persons per square meter. As only 85 metres (279 ft) of the coast have been excavated, the casualties waiting to be excavated may well be as high as the thousands." 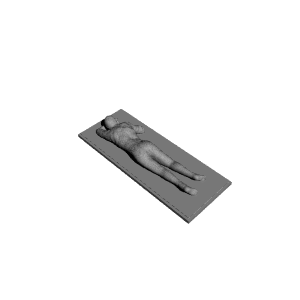 ×
3 collections where you can find Cast of a Woman at The Pompeii Antiquarium, Pompeii by Scan The World