3D
Scan The World
3,439 views 271 downloads
5 collections
Community Prints Add your picture
Be the first to share a picture of this printed object
0 comments

Tous les amateurs de la race féline voudrant avoir ce chef-d’oeuvre d’observation et de naturel.  (L’Illustration, 1849, p. 414) - 'All lovers of the feline race want to own this masterpiece of observation and naturalism.'The exhibition debut of Chatte et ses petits at the 1849 Paris Salon in plaster was Fremiet’s first great sculptural coup. Then aged twenty-five, over the previous five years he had shown only six modest works.  The assessment of the critic for L’Illustration magazine quoted above reflects the wide popular acclaim this work received on its first public exhibition.

Coupled with the critical applause came official state recognition when, on 6 October 1849, Fremiet was commissioned by the state to carve Chatte et ses petits in marble for the price of 2,000 francs. The government also covered the cost of the marble, which is recorded to have been a block from Carrara worth 500 francs. Though known primarily as a sculptor of animals in bronze, Fremiet in this work made use of the unique qualities of white marble to represent his feline subject with a lively rendering of textures and detail. The cat’s anatomy and fur are treated with astonishing scientific accuracy, tempered by an illusionistic treatment of the surface which brings to life the softness of the feline’s coat. The mother lifts her right leg to reveal the writhing bodies of two small, eagerly feeding kittens. Unperturbed by this event, the mother cat relaxes with half-closed eyelids and a languid stretching of her left arm.

This exquisite marble was Fremiet’s first state commission, and it is perhaps not insignificant that, despite the intimate and lifelike nature of the subject, there is a monumentality to the composition that allows for symbolic interpretation. It could be argued that Fremiet’s marble echoes the idea of the state nurturing its people, a veiled political statement that would have appealed to the sculptor’s new patrons. In his conception of Chatte et ses petits, Fremiet may also have been inspired by ancient Egyptian representations of the subject as Bastet, the patron saint of the home. Ultimately, however, the marble epitomises the animalier movement in French sculpture, with its combination of the everyday with the ideal, the Romantic with the scientific.

Encouraged by his success, Fremiet sent his marble Chatte to numerous shows, culminating with the International Exhibition in London in 1862; this was followed by several exhibitions of the model in bronze. The state-commissioned marble was placed in the Tuileries apartments of General Valliant, Marshal of France and housekeeper to Napoleon III., and was long thought to have been destroyed in the Tuileries fire of 1871 (see Barlett, op. cit., p. 103).  However, it is clear that the marble commissioned by the state was one and the same as that sent to the International Exhibition: the Imperial Government is listed as the lender in the London 1862 catalogue, so there is every reason to suppose that Fremiet made only one example in marble. The existence of the present, extremely fine, marble appears to prove that Fremiet’s celebrated work in fact survives.

As the original and unique Salon marble of Fremiet’s first important animalier group, and his first state commission, the present marble is a highly significant and iconic work among the artist’s existing corpus. Bartlett (op. cit., p. 102) described Chatte et ses petits as ‘long since regarded as one of the most charming things he ever made: a little masterpiece’. 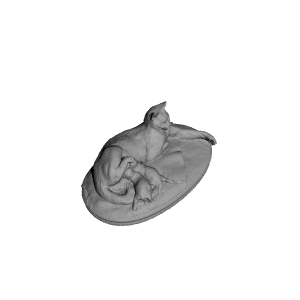