3D
360°
Scan The World
2,687 views 138 downloads
Community Prints Add your picture
Be the first to share a picture of this printed object
0 comments

Cecil Rhodes (1853-1902) was a colonialist British businessman, mining magnate and politician in Southern Africa who served as the 7th Prime Minister of the Cape Colony from 1890 to 1896. One of Rhodes' primary motivations in politics and business was his professed belief that the Anglo-Saxon race was, to quote his will, "The first race in the world". Under the reasoning that "the more of the world we inhabit the better it is for the human race", he advocated vigorous settler colonialism.

Due to his huge amount of influence on the country, Rhodes Memorial was built on Devil's Peak in Cape Town shortly after his death. Designed by the architect Sir Herbert Baker, this bust (by John Macallan Swan) stands at the top of the structure, built to resemble the Temple of Pergamon or Greek temple at Segesta. The bust, overlooking Cape Town, is inscribed "To the spirit and life work of Cecil John Rhodes who loved and Served South Africa". Below the bust features the last four lines of the last stanza from the 1902 poem 'Burial' by Rudyard Kipling:

The immense and brooding spirit still
Shall quicken and control.
Living he was the land, and dead,
His soul shall be her soul!

Because of Rhodes' white supremacist and colonialist politics there have been many calls to remove the memorial. On the 18th September 2015 the bust was vandalised with the nose bust off and marked with graffiti, noting Rhodes as a "Racist, thief [and] Murderer". This happened after the protest movement #RhodesMustFall which began on the 9th March 2015 which lead to the removal of another sculpture of Rhodes on display at The University of Cape Town. 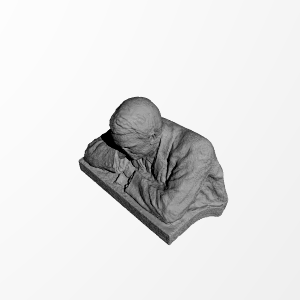