I created this model for the SelfCAD / MyMiniFactory design competition.

The original concept of this design was to have a voronoi inspired lamp that had a suspended container at the top to hold a succulent.

I had generated the pattern by clicking a series of 50 random points & lines made into cells equidistant apart using a voronoi generator found at http://alexbeutel.com/webgl/voronoi.html

Once I had the pattern I liked I had printed out the image and traced over the image with a sharpie on a blank piece of paper to get the branches of the cells. After I had the outlines drawn I took another piece of paper and traced the insides giving a bit of thickness that would eventually be the structure of the vase.

Once I had the pattern drawn, I had scanned the piece of paper and cleaned up the image in photoshop. In photoshop I did a number of smoothing techniques to correct the handdrawing so that it wasn't too fuzzy before I brought it into SelfCAD. I had also colored in the cells so that they would be the "negatives" when I brought the image into SelfCAD.

After the image was converted to 3D in SelfCAD, I had bent the surface 120 degrees and copied the piece two times to create a cylinder. After merging the cylinder, I had tapered the model several times and stretched until I got the form I liked.

After I had the main form created, I had created the suspended holder for the succulent by generating a cone and subtracting a copy of itself.

I had actually printed this model upside down to eliminate the need for support materials.

If I were to play around with the print settings more I would suggest slowing down the print speed and adjusting the retraction settings because I did get a considerable amount of stringing when the extruder would jump from each "branch" of the structure.

Please check out my youtube video of how I created this vase in more detail! https://youtu.be/RySA3am7AX8 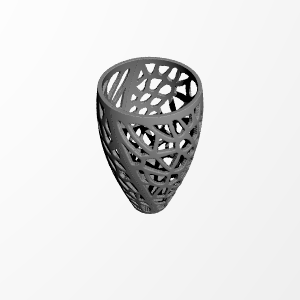 ×
19 collections where you can find Cellular Planter / Lamp by areynolds15
×
Cau
@Stormkeaper
6
Printed on: Artillery Sidewinder X1
Material: PLA
Posted at: 24th May 2022