3D
Scan The World
1,846 views 127 downloads
1 collection
Community Prints Add your picture
Be the first to share a picture of this printed object
0 comments

This piece is metope from the south side of the Pantheon In classical architecture. Metope is a rectangular architectural element which often has painted or sculptural decoration.

This metope one of the most famous example. It is one of the 92 metopes of the Parthenon marbles some of which depict the battle between the Centaurs and the Lapiths.

This story is one of the Greek myth which tells us how of Lapiths invited the Centaurs to the wedding of their King, Pirithous. During the feast, the Centaurs sought to steal the bride, the beautiful Hippodamia, and her friends. Thus began a great battle, in which the Lapiths were victorious only thanks to the aid of the gods. 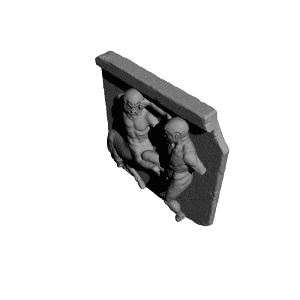