3D
Scan The World
2,951 views 289 downloads
3 collections
Community Prints Add your picture
Be the first to share a picture of this printed object
0 comments

A centurion was a professional officer of the Roman army after the Marian reforms of 107 BC. Most centurions commanded groups of centuries of around 80 men  but senior centurions commanded cohorts or took senior staff roles in their legion. Centurions were also found in the Roman navy. In the Byzantine Army, they are also known by the name kentarch (κένταρχος, kentarchos). Their symbol of office was the vine staff, with which they disciplined even Roman citizens protected from other forms of beating by the Porcian Laws. 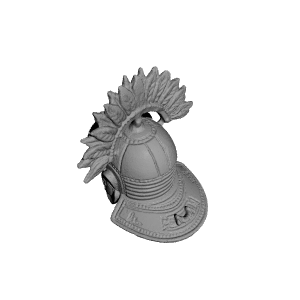