3D
360°
Scan The World
1,918 views 47 downloads
Community Prints Add your picture
Be the first to share a picture of this printed object
0 comments

The stele and aedicula, in limestone, is worked on two distinct blocks of different depths. The epigraphic text mentions Minucius Lorarius centurion of the legion Martia. The niche is entirely occupied by the figure of a centurion in a frontal position and in uniform. The tunic is covered by a cloak on the chest with a cloak, and at the waist it carries a belt (cingulum) from which hangs a small dagger (pugio). The left hand, with the centurions' own ring, holds the sword (gladius) while the right hand holds a vine branch (vitis), another disctintive sign of the charge. Sturdy shoes seem to be covered with overshoes.

Two holes on the sides of the garment perhaps testify to the attachment of a metal crown in memory of the perpetual privilege of wearing an olive crown in public ceremonies, reserved for soldiers of the martial legion. the unusual monumental dimensions and the choice of the rare whole figure clearly show how the career in the army was an instrument of social ascent 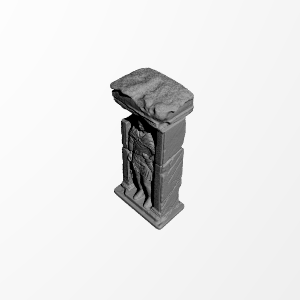