Orthoceras was an ancient mollusk that lived more than 400 million years ago. The name means straight horn, referring to the characteristic long, straight, conical shell. The preserved shell is all that remains of this ancestor of our modern-day squid.

The soft body lived in the last open-ended segment at the large end of the conical shell. As the body grew and the housing segment became too small, a dividing wall, called the septa, grew to separate the old “home chamber” from the new one. The differences in the composition of these shell parts allowed for differences in fossilization so the parts can be seen.

Two specimens of the Silurian cephalopod Orthoceras ludense from the Ludlow area. 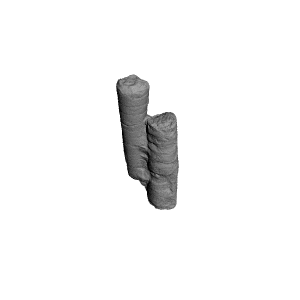 ×
0 collections where you can find Cephalopod - Orthoceras by fossilsinshropshire