Ceremonial Seat for a Noble (Osa'osa) at Quai Branly, Paris

3D
Scan The World
3,480 views 72 downloads
Community Prints Add your picture
Be the first to share a picture of this printed object
0 comments

Ceremonial Seat for a Noble (Osa'osa) at Quai Branly, Paris

The artists of Nias island are notable for their monumental stone sculpture. Created to honor nobles of either sex, large stone sculptures were commissioned by aristocratic men as part of the ceremonial requirements of owasa ("feasts of merit"). Stone seats (osa'osa) are unique to Central Nias, where they serve as thrones for high-ranking nobles on important occasions.

Osa'osa often bear multiple names, describing different aspects of their form and imagery. Broadly, this work is a si sara bagi, indicating that it has one (rather than three) heads. More poetically it is called laeluo ("leaves in the sun"), a metaphorical reference to its aristocratic sponsor, whose resplendence illuminates the village like sunlight shining on the leaves of trees. Specifically, it is a gogowaya (hornbill), a large forest bird, depicted as a fantastic composite creature with the legs and teeth of a feline or crocodile, the antlers of a deer, and the beak, crest, and tail of a hornbill. Serving as a supernatural guardian for its noble rider, its ferocity is emphasized by a warrior's necklace (kalabubu) worn around its throat. 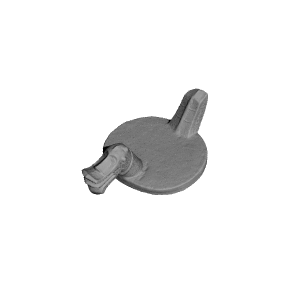 ×
0 collections where you can find Ceremonial Seat for a Noble (Osa'osa) at Quai Branly, Paris by Quai Branly