3D
Scan The World
2,266 views 138 downloads
Community Prints Add your picture
Be the first to share a picture of this printed object
0 comments

Gilles-Lambert Godecharle (1750-1835) was a Belgian sculptor, a pupil of Laurent Delvaux, "the only sculptor of international repute in Delvaux's retinue", who became one of two outstanding representatives of Neoclassicism in the Austrian Netherlands. In response to his early promise, empress Maria Theresa awarded him a stipend that enabled him to travel for his studies, first to Paris, then to Rome. He received official commissions under Napoleon and underWilliam I of the Netherlands. His pediment sculptures for the Chamber of Representatives and the Senate of the Austrian Netherlands, now the Belgian Federal Parliament, Brussels, (1781–82) are his most prominent public commission, represented today by a careful copy following his models conserved at the Musées royaux des Beaux-Arts de Belgique, Brussels but by far the greatest part of his output was in portrait busts. His son Napoleon Godecharle bequeathed an important part of the family fortune to the City of Brussels, to establish the Prix Godecharle for painters, sculptors and architects. 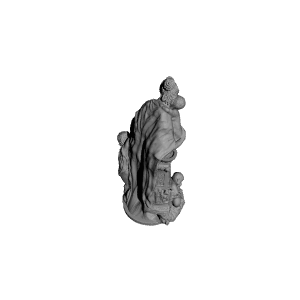 ×
0 collections where you can find Charity at The Fine Arts Museum, Brussels by Scan The World