3D
Scan The World
4,117 views 188 downloads
1 collection
Community Prints Add your picture
Be the first to share a picture of this printed object
0 comments

Jean-Baptiste Carpeaux was much sought after as a portraitist by prominent sitters, including members of the French imperial household. Among his finest busts is this posthumous portrait of his older brother, Charles, a musician, who died in 1870 after long suffering. Carpeaux made an initial, rapid sketch of his brother in plaster (Musée du Petit Palais, Paris), which the sculptor’s earliest biographers claimed was made entirely for himself as his brother lay ill. The Kimbell’s terracotta cast, whose surface was remodeled with additional clay, preserves a sense of the artist’s own physical involvement in the material through the sketchy handling, especially in the texture of the jacket and the hair. The back and side of the figure’s coat show the traces of the artist’s fingers in the process of forming, while the lines along the sleeves, apparently made with a stylus, are comparable to chisel marks still visible on a marble work in process. These textures, indications that the work is not “finished” by conventional standards, are richly suggestive, perhaps drawing upon the expressive power of the unfinished sculptures of Carpeaux’s hero, Michelangelo. The hand and tool marks provide a sense of intimacy, suggesting that the viewer is watching over the shoulder of the sculptor at work in his studio. They also provide elegaic overtones: the rough, unfinished look seems in keeping with the subject’s “unfinished” life. By virtue of its exciting, informal surfaces, this portrait is among Carpeaux’s most modern works, anticipating the similarly modern-minded experimentation of Rodin. Among the preeminent French sculptors of his day, Carpeaux remains best known for his influential sculpture of nude allegorical figures for the facade of the new Paris Opera House (The Dance, now in the Musée d’Orsay, Paris), which was condemned as indecent and even vandalized shortly after completion in 1869. 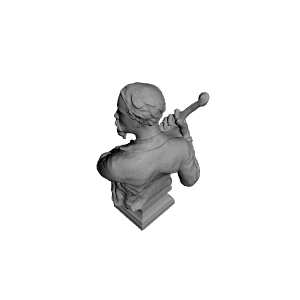 ×
1 collections where you can find Charles Carpeaux at The Kimbell Art Museum, USA by 3DLirious