3D
Scan The World
2,817 views 113 downloads
Community Prints Add your picture
Be the first to share a picture of this printed object
0 comments

Charles de Wailly (9 November 1730 – 2 November 1798) was a French architect and urbanist, and furniture designer, one of the principals in the Neoclassical revival of the Antique. His major work was the Théâtre de l'Odéon for the Comédie-Française (1779–82). In his designs, de Wailly showed a predilection for the perfect figure, the circle.

After having obtained the Prix de Rome for architecture in 1752 he went to the French Academy in Rome for three years until 1755, sharing his prize with his friend Pierre-Louis Moreau-Desproux. Both participated in the excavations at the Baths of Diocletian. In Rome, de Wailly founded a friendship with the sculptor Augustin Pajou, who was to carve this bust and that of his wife and for whom, in 1776, he would build a house adjoining his own, in Paris.

Augustin Pajou was an incredibly productive sculptor who tackled all genres and illustrated the reign of Louis XV to the Revolution. The portraitist felt particularly of Louis XVI and Madame du Barry, and created the famed portrait of one of his closest friends, the architect Charles de Wailly (1729 - 1798), designer of the Odeon Theatre in Paris (1782) and director of opera at Versailles under the direction of Gabriel .
The bust of the Musée de Lille is an intimate portrait, partly cloudy neck , both sides of the open fur jacket . The natural hair , without wig, and contemporary clothing emphasize realism and the truth of the model.


This object is part of "Scan The World". Scan the World is a non-profit initiative introduced by MyMiniFactory, through which we are creating a digital archive of fully 3D printable sculptures, artworks and landmarks from across the globe for the public to access for free. Scan the World is an open source, community effort, if you have interesting items around you and would like to contribute, email stw@myminifactory.com
to find out how you can help. 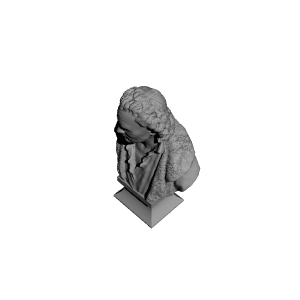 ×
0 collections where you can find Charles de Wailly at The Palais des Beaux-Arts in Lille, France by Scan The World