3D
Scan The World
3,873 views 115 downloads
Community Prints Add your picture
Be the first to share a picture of this printed object
0 comments

The statue once belonged to W.S.Gilbert and was at his home, Grim's Dyke in Harrow Weald. It was still there in 1915 after his death, but his widow arranged for it to be restored to Soho Square on her death. Caroline's Miscellany explains how Gilbert acquired toe statue: The gardens were redesigned in 1975 and the statue was bought by Thomas Blackwell who had the Crosse & Blackwell HQ in Soho Square. Blackwell gave it to the artist Frederick Goodall who lived at Grim's Dyke and in 1890 it was sold with the house to Gilbert. 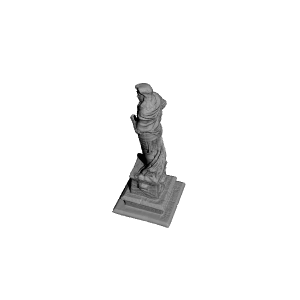 ×
0 collections where you can find Charles II, Soho Square, London by Scan The World