3D
Scan The World
4,375 views 197 downloads
Community Prints Add your picture
Be the first to share a picture of this printed object
0 comments

Charles Jams Fox by Sir Richard Westmacott was made in 1816 in Bloomsbury Square, London. The bronze statue reflects Fox's popularity in several ways. First, it was erected relatively quickly, for the tenth anniversary of his death. Then it was erected with the surplus from a fund raised for his monument in Westminster Abbey. Finally, it is now positioned in the heart of Bloomsbury, very close to the British Museum.
This object is part of "Scan The World". Scan the World is a non-profit initiative introduced by MyMiniFactory, through which we are creating a digital archive of fully 3D printable sculptures, artworks and landmarks from across the globe for the public to access for free. Scan the World is an open source, community effort, if you have interesting items around you and would like to contribute, email stw@myminifactory.com to find out how you can help.
Show more Show less
License
Printing Details 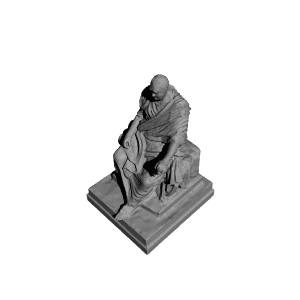 ×
0 collections where you can find Charles James Fox, Bloomsbury Square, London by Scan The World