3D
Scan The World
4,601 views 384 downloads
2 collections
Community Prints Add your picture
Be the first to share a picture of this printed object
0 comments

Charles V (24 February 1500 – 21 September 1558), was a Duke of Burgundy and Holy Roman Emperor. He was ruler of both the Spanish Empire from 1516 and Holy Roman Empire from 1519, as well as of Habsburg Netherlands from 1506, until he voluntarily stepped down from these and other positions by a series of abdications between 1554 and 1556. Through inheritance, he brought together under his rule extensive territories in western, central, and southern Europe, and theSpanish colonies in the Americas and Asia. As a result, his domains spanned nearly four million square kilometers, and were the first to be described as "the empire on which the sun never sets".

Charles was the heir of three of Europe's leading dynasties: the Houses of Valois-Burgundy (Netherlands), Habsburg (Holy Roman Empire), and Trastámara (Spain). He inherited the Burgundian Netherlands and the Franche-Comté as heir of the House of Valois-Burgundy. From his own dynasty, the Habsburgs, he inherited Austria and other lands in central Europe. He was also elected to succeed his Habsburg grandfather, Maximilian I as Holy Roman Emperor, a title held by the Habsburgs since 1440. From the Spanish House of Trastámara, he inherited the crowns of Castile, which was in the process of developing a nascent empire in the Americas and Asia, and Aragon. The latter included a Mediterranean empire that extended toSouthern Italy. Charles was the first king to rule Castile and Aragon simultaneously in his own right, and, as a result, is sometimes referred to as the first King of Spain.

The personal union, under Charles, of the Holy Roman Empire with the Spanish Empire resulted in the closest Europe would come to a universal monarchy in thepost-classical era.[6]

Fearing that his vast inheritance would lead to the realization of a universal monarchy and that he was trying to create a European hegemony, Charles was the object of hostility from many enemies. His reign was dominated by war, and particularly by three major simultaneous conflicts: the Habsburg-Valois Wars with France, the struggle to halt the Ottoman advance, and the Protestant Reformationresulting in conflict with the German princes. The wars with France, mainly fought in Italy, resulted in recovery of territory lost at the beginning of his reign and included the decisive defeat and capture of Francis I of France at the Battle of Pavia in 1525. France recovered and the wars continued for the remainder of Charles's reign. Enormously expensive, they led to the development of the first modern professional army in Europe, the Tercios.

The struggle with the Ottoman Empire was fought in Hungary and the Mediterranean. After seizing most of eastern and central Hungary in 1526, the Ottomans’ advance was halted at their failed Siege of Vienna in 1529. A lengthy war of attrition, conducted on his behalf by his younger brother Ferdinand, continued for the rest of Charles's reign. In the Mediterranean, although there were some successes, Charles was unable to prevent the Ottomans’ increasing naval dominance and the piratical activity of the Barbary Corsairs. Charles opposed the Reformation and in Germany he was in conflict with the Protestant Princes of the Schmalkaldic League who were motivated by both religious and political opposition to him. He could not prevent the spread of Protestantism and although he won a decisive victory against the Princes at the Battle of Mühlberg, 1547, he was ultimately forced to concede the Peace of Augsburg of 1555 which divided Germany on confessional lines.

Though rebellions were not something that Charles concerned himself with frequently, he was quick to put down three particularly dangerous rebellions in the vital territories of Castile, the Frisian lands, and later in his reign in the port city ofGhent. However, once the rebellions were quelled the essential Castilian and Burgundian territories remained mostly loyal to Charles throughout his rule.

Charles’s Spanish dominions were the chief source of his power and wealth. As his reign progressed, his Spanish realms became increasingly important. In the Americas, Charles sanctioned the conquest by Castillian conquistadors of the Aztec and Inca empires. Castillian control was extended across much of South and Central America. The resulting vast expansion of territory and the flows of South American silver to Castile had profound long term effects on Spain.

Charles was only 56 when he abdicated, but after 34 years of energetic rule he was physically exhausted and sought the peace of a monastery where he died at the age of 58. On Charles’s abdications, the Holy Roman Empire was inherited by his younger brother Ferdinand (who had already been given the Austrian lands in 1521). The Spanish Empire, including the possessions in the Netherlands and Italy, was inherited by Charles’s son Philip II. The two empires would remain allies until the 18th century. 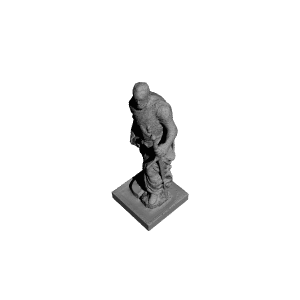 ×
2 collections where you can find Charles V in Prisenhof, Ghent by Scan The World