3D
Scan The World
3,479 views 210 downloads
3 collections
Community Prints Add your picture
Be the first to share a picture of this printed object
0 comments

One of Chicago's unsung but still beautiful skyscrapers, the JPMorgan Chase Tower stands watch as the most prominent architectural feature of the central Loop.

It's most noticeable physical aspects are the graceful slopes of its Northern and Southern flanks. They induce a bit of forced perspective and make the tower seem taller than it is, but were designed to serve a purely utilitarian function. At the time this building was erected, the bank that commissioned it needed a large contiguous floorplate at ground level to handle daily transactions while at the same time offering high-placed executives equally high offices in the tower portion of the building. The solution was a downward slope that also adds geometric interest to what would otherwise be a fairly bland brown rectangle.

It seems almost Japanese in structure, in part because of the windows set back from the concrete creating a visual moment reminiscent of a high-tech hive, and because of the "Fuji" shape that reveals itself on the mostly windowless Eastern and Western facades.

It should be no surprise, then, to lear that the building's designer was Japanese. He has designed several nearly identical buildings around the world including Tokyo and New York.

The Southern slope descends below grade level into a sunken garden with a fountain at its center. This should be a welcoming place of relief for weary Loop workers in much the same way that the sunken plaza at the John Hancock Center provides a refuge for weary shoppers, but it does not. The plaza is mostly ignored by the public, in part because it is almost entirely concrete, and lacks any greenery or water features that anyone can get near. Further, its bright color intensifies the Summer sun and turns the bowl into a parabolic cooker for anyone who stays too long. 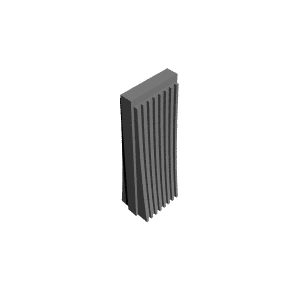 ×
3 collections where you can find Chase Tower in Chicago, Illinois by jkurstin22