3D
360°
Scan The World
2,079 views 96 downloads
1 collection
Community Prints Add your picture
Be the first to share a picture of this printed object
0 comments

At just sixteen years of age, Mario Salazzari won a competition to realise the Monumentro ai Caduti, in the Borgo Roma neighbourhood of Verona, which was unveiled later in 1925. This work was followed by such other important commissions as that for the Monumento al Genio Pontieri now on the Lungadige Capuleti, and the Monumento al Pontiere d'Italia, in Piacenza. Chiaro di luna belongs to this creative period: the face of the young woman is modelled and defined as it emerges from the raw plaster, with an explicit reference to the sculpture of Medardo Rosso.

Salazzari's work, such as the equestrian groups on the Ponte della Vittoria, was later to be influenced by Liberty filtered through the ideas of the Venetian Secession group based at Ca'Pesaro; this group was centred around Felice Casorati whom Salazzari had been introduced to by the artist Prati. 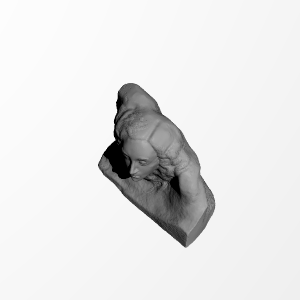