3D
Scan The World
2,427 views 72 downloads
Community Prints Add your picture
Be the first to share a picture of this printed object
0 comments

The statue, highly well executed, has been discussed in terms of both cronology and subject identification.

The young beardless face framed with long curly hair, wears a dress tunic and pallium, has a scroll in his left hand, while his right arm, incomplete, is tense. He sits on a seat which, carved separately from the statue and connected thereto by a pin, has legs which terminate in lion's paw, the blanket back from a drape and a placed cushion on the seat (has been identified with a Klismos or one stool with backrest, but without armrests). The face of the young man, characterized by rimarcati eyes from the large pupil and engraved with her lips slightly parted, shows an interesting contrast between the smooth and delicate modeling of the face and the yield dynamics of the hair. At the foot wearing the footwear that leave the fingers free. The plinth, of trapezoidal shape, on which the statue rests is equipped with two strips and a groove on the front side and on part of the hips, while the rest is not finished; that particular it suggested the possible location of the work within a niche. 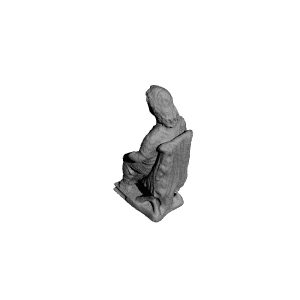