3D
Scan The World
4,462 views 300 downloads
3 collections
Community Prints Add your picture
Be the first to share a picture of this printed object
0 comments

Christ is a 1147 sculpture of Christ made in 1147 and now part of the permanent collection of the National Art Museum of Catalonia. It comes from an undetermined church of the diocese of Urgell, probably Andorra.

Inside the wooden Romanesque sculpture in Catalonia, this is an exceptional piece in terms of being able to precisely date, which only occurs in two works. Thus, a restoration conducted in 1952 discovered a cavity existing in the back of the figure of Christ, which contained several relics wrapped in a tissue and hispanomusulmán scrolls. One of them kept an inscription which reads the date of consecration of the work in 1147, which gives the name. Another scroll was referring to the recognition of the relics in 1521, making it saw its use beyond the Middle Ages and remodeling at the time.

To some extent, it is a valuable piece for the dating of similar works and also reminds us that some images were also used as reliquaries.

Unlike Majesties (or triumphant Christ), Christ the 1147 exemplifies the kind of suffering Christ (Christus Patiens), represented topless, wearing only a faldonet or perizonium and with arms slightly bent. Although it refers to the redeeming death of Christ, focuses more on the suffering, the death of Christ as a man. The hardness of facial helps to highlight this aspect, as well as the approach of the anatomy. However, keep in mind that the work has lost almost all its polychrome, so that its original appearance was very different from today's. The Catalan area contains many examples of this kind, just as the Roman general. Among the most important antecedents, notably Gero Christ, preserved in Cologne (Germany) and dated between 960 and 980.

Quite difficult print. Result is better when printing it face up, but much supports needed between the cross and the back then. Carefully remove it in order not to break anything. 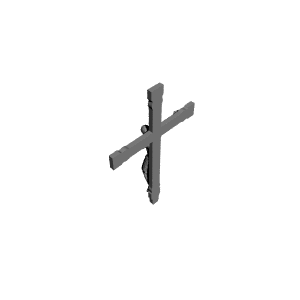