3D
Scan The World
1,729 views 112 downloads
Community Prints Add your picture
Be the first to share a picture of this printed object
0 comments

This is a marble bust sculpture of Christian Friedrich Tieck, often known only as Friedrich Tieck, was a German sculptor and a brother of Ludwig and Sophie Tieck.
Tieck was born in Berlin, the younger brother of the writers Ludwig and Sophie Tieck. He was taught by Johann Gottfried Schadow in Berlin and David d'Angers in Paris. In 1801-05 he was employed at Weimar, where he associated with Goethe and designed his bust, which he afterwards also executed in marble for the Walhalla temple. In 1805 he went to Italy, returning to Germany in 1809, at the invitation of Crown Prince Ludwig of Bavaria. For this patron, he executed at Munich and Carrara a large number of busts, including those of the Prince himself, of Schelling, of Alexander von Humboldt, and of his brother Ludwig. In 1819 he began his celebrated series of mythological sculptures for the Royal Theatre at Berlin, and in 1820 he was made professor at the Berlin Academy, designing statues of genii for the National Monument for the Liberation Wars. This work occupied him until 1829, when he began the series for the Berlin Museum, which includes the bronze group of “Horse Tamers” upon the roof, and a statue of Karl Friedrich Schinkel in the corridor.

Based on a concept by Schinkel, Tieck created the tomb of General Gerhard von Scharnhorst at Berlin's Invalidenfriedhof in 1822. He also created a bust of Wilhelm Heinrich Wackenroder and a lion made of bronze after a model by Christian Daniel Rauch. Tieck's monument to Nicolaus Copernicus was erected posthumously in Thorn.

Tieck was one of the principal representatives of the school founded by Rauch. His technique, however, was less naturalistic than that of Rauch, and smoother and more detailed in execution. 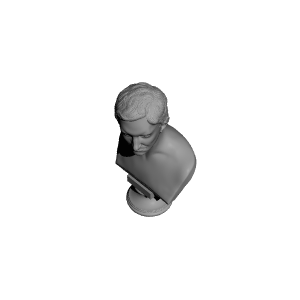