3D
Scan The World
1,259 views 62 downloads
Community Prints Add your picture
Be the first to share a picture of this printed object
0 comments

Thorvaldsen made a portrait bust of a middle-aged gentleman in Rome about 1818. The original plaster model of the bust was assumed to represent the English baron, Sir Francis Basset of Dunstanville (1747-1821). According to the sources, Sir Francis had commissioned a portrait bust of himself in Rome in 1818. However, in autumn 2000, Thorvaldsens Museum suddenly received a letter from the museum of fine arts in Ravenna, the Museo d’Arte della Cittá di Ravenna, which explained and showed that the assumed English sir is actually an Italian Signore - Christino Rasponi. 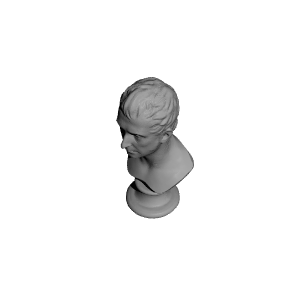