3D
Scan The World
2,235 views 114 downloads
5 collections
Community Prints Add your picture
Be the first to share a picture of this printed object
0 comments

The Chu state in south-east China had a unique culture of its own, yet also interacted with other states. This is reflected in the variety of its coinage, from small bronze coins to spade money and gold ingots.

Chu was a hegemonic, Zhou dynasty era state. Following the trend of the time, the rulers of Chu declared themselves kings on an equal footing with the Zhou rulers from the time of King Wu in the early 8th century BC. Though initially inconsequential, removed to the south of the Zhou heartland and practising differing customs, Chu began a series of administrative reforms, becoming a successful expansionist state during the Spring and Autumn period. It was ultimately incorporated into the prestigious Zhou court and interstate relations as a viscounty, a title bestowed in order to pacify it. With its continued expansion Chu became a great if corrupt Warring States power, and its culture a major influence on the Han dynasty.

Print on long edge with supports or short edge without supports, but there's a tendency for the part to be knocked over when printing tall. 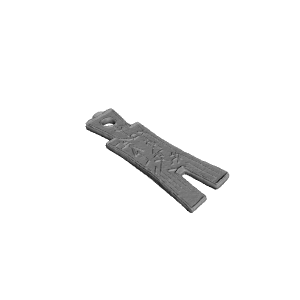 ×
5 collections where you can find Chu State spade-money at The British Museum, London by Scan The World