Cincinnatus at the Palace of Beaux-Arts in Lille, France

3D
Scan The World
3,055 views 155 downloads
Community Prints Add your picture
Be the first to share a picture of this printed object
0 comments

Cincinnatus at the Palace of Beaux-Arts in Lille, France

This 1834 marble statue depicts Cincinnatus looking like one cool dude...standing naked and leaning against some type of column with his legs crossed at the shins. His left hand rests out in front of him holding an object while his right hand rests on his waist behind him.

An aristocrat, Cincinnatus voluntarily relinquished power after serving Rome as Dictator during difficult periods. Despite being an opponent to the Plebians, he was nevertheless chosen to be Rome's Dictator.

Denis Foyatier (1793-1863) was a French sculptor whose son, Jules Blanchard, also became an artist. Unfortunately, some of Foyatier's works have been lost...some even melted down during WWII. 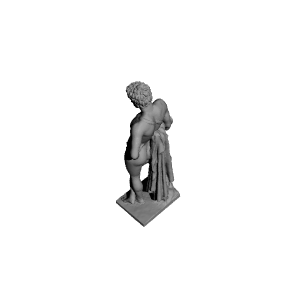 ×
0 collections where you can find Cincinnatus at the Palace of Beaux-Arts in Lille, France by Scan The World