3D
Scan The World
2,900 views 190 downloads
2 collections
Community Prints Add your picture
Be the first to share a picture of this printed object
0 comments

Created by Simone Bianco, an Italian artist (1512-1553). This bust of Cleopatra depicts her emotion in an impressive way. Her facial expression is neutral however she shows a sense of sorrow and beauty by the way she gazes towards her left and her mouth slightly open. The piece itself is silenced yet there is a suggestion of vulnerability and innocence to her.

Cleopatra VII ruled ancient Egypt as co-regent (first with her two younger brothers and then with her son) for almost three decades. She became the last in a dynasty of Macedonian rulers founded by Ptolemy, who served as general under Alexander the Great during his conquest of Egypt in 332 BC. Well-educated and clever, Cleopatra could speak various languages and served as the dominant ruler in all three of her co-regencies. Her romantic liaisons and military alliances with the Roman leaders Julius Caesar and Mark Antony, as well as her supposed exotic beauty and powers of seduction, earned her an enduring place in history and popular myth. 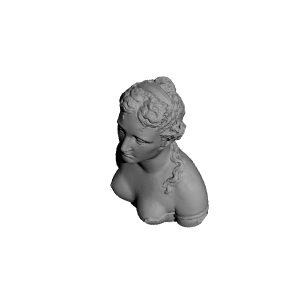 ×
2 collections where you can find Cleopatra by Scan The World