Neoclassical sculptors often drew upon mythology, ancient history, the Bible, and classical and contemporary literature for their subject matter. The full-size marbles of Massachusetts native William Wetmore Story exemplify this trend, and Cleopatra, his most famous work, was one of dozens of subjects such as Medea, Delilah, Electra, and Saul that were produced in his Rome studio. In these sculptures, Story developed a particular personage as the theme for his sculpture: famous—or infamous—personalities from history, usually female, are presented on a monumental scale, in a moment of extreme cerebral activity. Whether reflecting on past behavior or contemplating future actions, the figures are thinking about deeds of cataclysmic significance. Story described his interest in depicting such moments in sculpture: "What is left undone is as necessary to a true work of art as what is done." For him the suggestion of imminent action was more provocative than the depiction of melodrama. Inspired in his choice of subject by the current resurgence of interest in Egyptian culture, in 1858 Story began modeling his Cleopatra (69–30 B.C.), the last Macedonian ruler of Egypt, meditating on her suicide. The attention paid to historical accuracy is matched by the virtuosity of the carving. Viewers of Story's work admired his attempts at archaeological correctness in his portrayal of Cleopatra's nemes, the headcloth worn by Egyptian royalty, topped with the uraeus, or cobra headdress. Although Cleopatra's jewelry and other details of the work have a Victorian flair (the scarab bracelet, for example, is in the style of the day), Story was successful in setting the "Egyptian" tone of his sculpture.

The statues of Harvard-educated William Wetmore Story exemplify this inclination, and Cleopatra, his most famous work, was only one of dozens of subjects such as Medea, Delilah, Electra, and Saul that were produced in his studio. "Cleopatra" is highly representative of Story's oeuvre: most of his statues are single figures in the round, often seated deep in thought meditating on deeds of cataclysmic significance; here Cleopatra contemplates her suicide.
(source, metropolitan museum of art)
This object is part of "Scan The World". Scan the World is a non-profit initiative introduced by MyMiniFactory, through which we are creating a digital archive of fully 3D printable sculptures, artworks and landmarks from across the globe for the public to access for free. Scan the World is an open source, community effort, if you have interesting items around you and would like to contribute, email stw@myminifactory.com to find out how you can help.
Show more Show less
License
Printing Details 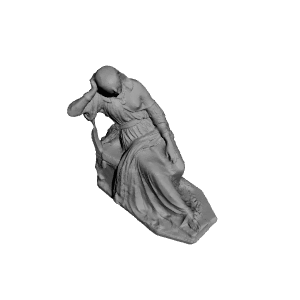