After her defeat at the hands of Octavian, Cleopatra, the Queen of Egypt, killed herself in 31 BC with the bite of an asp. This bust was part of a series dedicated to "stateswomen" from antiquity. The series was drawn by the Swede Cronstrom in July 1697, while the works were still in the sculptor's studio. 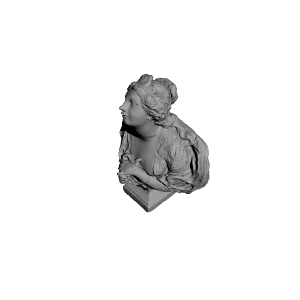