Clélia at The Palais des Beaux-Arts in Lille, France

3D
Scan The World
2,884 views 187 downloads
Community Prints Add your picture
Be the first to share a picture of this printed object
0 comments

Clélia at The Palais des Beaux-Arts in Lille, France

This is a lifesize marble sculpture depicting a young girl by the name of Clélia; it was sculpted in 1865 by Hector Lemaire. Lemaire (Lille, 15th August 1846- Paris, 1880) was a French Sculptor. After his studies in the academic school of Lille, Lemaire went on to continue his academia in art in Paris. He won many prizes and entered the school of fine arts where he worked with his peers Auguste Dumont and Alexandre Falguiere. he returned the to Lille in 1866 and travelled in Rome where he'd pick up inspiration for his sculptures, the majority of which followed a fine approach to detail and figures. He returned to Paris for the rest of his life. 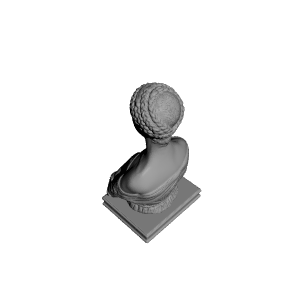 ×
0 collections where you can find Clélia at The Palais des Beaux-Arts in Lille, France by Scan The World