3D
360°
Scan The World
1,938 views 59 downloads
1 collection
Community Prints Add your picture
Be the first to share a picture of this printed object
0 comments

This stemma or shield of arms is made by the workshop of the Della Robbia, in Florence in the early 16th Century.

The relief is composed of fragments from two separate works. The upper part carries the arms of the Spini family (a Tuscan shield bearing the charge: Barry nebuly gules and or), and the lower part an inscription with the name of Simonetto di Corso and the date 1515.

The Della Robbia family was an Italian family of sculptors and potters. They were active in Florence from the early 15th Century and elsewhere in Italy and France will into the 16th. Family members were traditionally employed in the textile industry, and their name derives from rubia tinctorum, a red dye.

Luca della Robbia founded the family sculpture workshop in Florence and was regarded by contemporaries as a leading artistic innovator, comparable to Donatello and Masaccio. The influence of antique art and his characteristic liveliness and charm are evident in such works as the marble singing-gallery for Florence Cathedral. He is credited with the invention of the tin-glazed terracotta sculpture for which the family became well known. 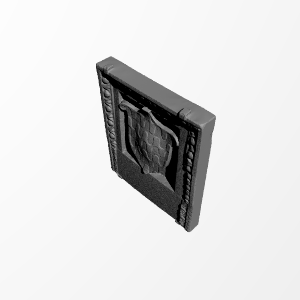 ×
1 collections where you can find Coat of Arms by vam