3D
Scan The World
1,712 views 167 downloads
3 collections
Community Prints Add your picture
Be the first to share a picture of this printed object
0 comments

This is a coat of arms (stemmi in Italian). The coat of arms shaped as a shield depict an eagle in the middle and a head portrait of an unknown knight at the top. The use of this symbol emerged in the 12th century as a way of identifying armoured knights in combat. The practice was then adopted by the nobility and by banking and merchant families. They placed them on the outside of buildings and on tombs as identifiers or signs of allegiance. Similar stemmi also appeared on livery and small-scale objects. 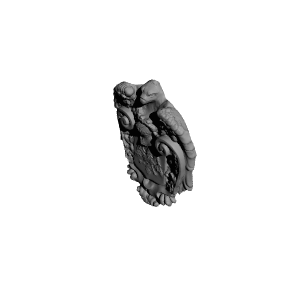