3D
Scan The World
3,608 views 116 downloads
Community Prints Add your picture
Be the first to share a picture of this printed object
0 comments

The primary capital of Zapotec culture was the ceremonial site of Monte Alban (in the modern state of Oaxaca), where the Zapotecs worshipped a complex pantheon of nature gods. Zapotec culture is divided into four stages, each associated with the style of gray-ware effigy urns they placed with their honored dead. This urn represents Cociyo, the Zapotec god of lightning and rain, identified by an amalgam of facial elements forming a powerfully sculptural mask. The stepped, two-part forms enclosing the eyes represent clouds and, by extension, the precious water needed to grow crops. The doubly plugged nasal extension is a development from earlier snouted deity elements that combine jaguar and snake allusions—the roar of the jaguar with the reverberation of thunder. The three fangs that protrude from this snout cover a bifurcated tongue, like the almost invisibly flashing tongue of a snake; the snake’s tongue symbolizes the lightning bolt. The broad mouth with drawn-back lips is derived from Olmec prototypes, among which would have been images of the baby rain god. The rest of the dress is as much that of a priest as of a deity, with the large disk-shaped earplugs and the knotted collar of high rank. The striations of the cape may be intended to represent feathers. The kilt is decorated with a wavelike pattern, with three attached tassels at the bottom. The ensemble thus echoes the various natural phenomena of a tropical mountain thunderstorm. 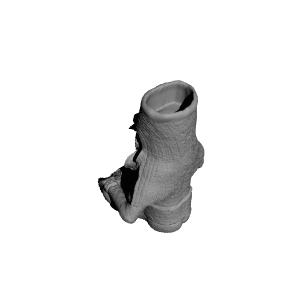 ×
0 collections where you can find Cociyo Urn at The Kimbell Art Museum, Texas by 3DLirious