3D
360°
Featured Scan The World
2,919 views 275 downloads
5 collections
Community Prints Add your picture
Be the first to share a picture of this printed object
1 comments

This is a cast of a colossal portrait bust of the emperor Lucius Verus, housed in the Louvre. The emperor turns his head slightly to his left and looks ahead. His brow is heavy, his eyes are narrow, his nose is prominent (from other copies), and his small, full lips are closed.

The bust of the original is modern and includes the upper chest but is cut before the shoulders. The original was discovered in 1720 at Lucius Verus' villa at the Acqua Traversa (Rome) with a colossal bust of his co-emperor, Marcus Aurelius - see KAS1133/1 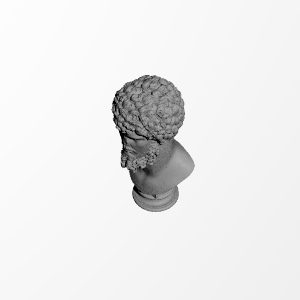