3D
Scan The World
4,077 views 194 downloads
Community Prints Add your picture
Be the first to share a picture of this printed object
0 comments

This sarcophagus entered the ludovisi collection shortly after its discovery in 1621, near hte Porta  Tiburtina in Rome,a s a gifr of the Capitulate of Santa Maria Maggiore to the Cardinal Ludovico Ludovisi. Battle scenes are chiseled on the front and on th etwo shorter sides. The frontal decoration is organized on three levels: the victorious Romans are depicted near to the top, together with the deceased, dressed as a generale: the central part consists of a battle between Romans and barbarians are lying: at the bottom the defeated barbarians are lying on the ground.
This work is an exemple of battle sarcophagi, a quite common prduction of mid 2nd century and early 3rd century AD. The face of the deceased perhaps reworked in a later period, may depict one of the sons of the emperor Decius: Hostilian, who died in 252AD or his brother Herennius Etruscus, who gightinh against the Goths in 251AD.

The scholar identifying the deceased with Herennius Etruscus hypthesize that the sarcophagus was made in Rome as the funeral monument of the oyung man or of his mother , Herennia Etruscilla. Indeed, the Boncompagni ludovisi Collection once held a sarcophagus cover with a portrait of Herennia Etruscilla. This piese, very likely the original cover for the Ludovisi Sarcophagus, is now in Mainz, Germany. 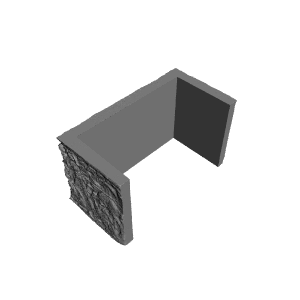