The Colosseum or Coliseum, also known as the Flavian Amphitheatre (Latin: Amphitheatrum Flavium; Italian: Anfiteatro Flavio) is an elliptical amphitheatre in the centre of the city of Rome, Italy. Built of concrete and stone, it is the largest amphitheatre ever built and is considered one of the greatest works of architecture and engineering.

The Colosseum is situated just east of the Roman Forum. Construction began under the emperor Vespasian in 72 AD, and was completed in 80 AD under his successor and heir Titus. Further modifications were made during the reign of Domitian (81–96). These three emperors are known as the Flavian dynasty, and the amphitheatre was named in Latin for its association with their family name (Flavius).

The Colosseum could hold, it is estimated, between 50,000 and 80,000 spectators, having an average audience of some 65,000; it was used for gladiatorial contests and public spectacles such as mock sea battles, animal hunts, executions, re-enactments of famous battles, and dramas based on Classical mythology. The building ceased to be used for entertainment in the early medieval era. It was later reused for such purposes as housing, workshops, quarters for a religious order, afortress, a quarry, and a Christian shrine.

Although in the 21st century it stays partially ruined because of damage caused by devastating earthquakes and stone-robbers, the Colosseum is an iconic symbol of Imperial Rome. It is one of Rome's most popular tourist attractions and has close connections with the Roman Catholic Church, as each Good Friday the Pope leads a torchlit "Way of the Cross" procession that starts in the area around the Colosseum.

Print with supports turned off and 0.2mm layer height and 10% infill. 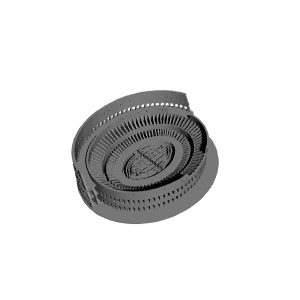 ×
43 collections where you can find Colosseum in Rome, Italy by map
×
Entresd
@Entresd
2
Printed on: UP! BOX
Material: ABS
Posted at: 12th August 2017

I love the detail of this model. Fun to watch print. Printed with no issues at 0.1mm layer height with a white PLA.

We printed this on the Tyler Public Library PolyPrinter 229.

This was a really awesome print. I used this as a test for the Marble filament I have. It turned out really nicely, I didn't have any hiccups with the print either. It took about 23 hours total.