3D
2,271 views 140 downloads
3 collections
Community Prints Add your picture
Be the first to share a picture of this printed object
1 comments

Somewhere in the southern outskirts of Ahmedabad lies a village named Fedra. Situated on highway it is known to be resting place for travelers passing by. Little did people know that it used to be and still is a residing territory for Rajputs, where they made sure that nothing in their houses will ever fall closer to mediocre. Whether it is the ornamentation, spatial relations or construction, all of it was delicately taken care of. Such houses are the delo houses. These houses have multiple spaces oriented within a confined complex that considers hierarchy, functions, gender, household activities, volume and scale. Even though the reign of Rajput may have dissolved, the spaces and elements still continue to tell the story in the form of this built heirloom. One day the space narrates the story, next day the same is done by finely articulated doll like wooden bracket of a column or ‘putli’ as named by the residents. There must be something significant about the kings, the warriors and the court member that they received its place on the bracket. A court dancer is one of the respected people. She is beautifully represented with the kadtaal in her hands. A dholi is seated next to her along with a baby on the other side representing her hard work and dedication. Rajput sure had a thing for identifying talents among the people they chose to crown their columns. As I said before they never settled for anything mediocre. 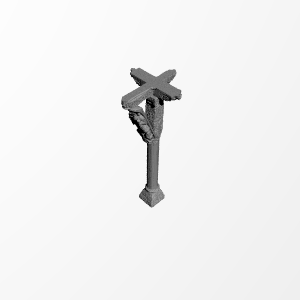 ×
3 collections where you can find Column: A Court Dancer by Scan the World India