Column base from the entrance of a Palace

3D
Scan The World
1,685 views 102 downloads
1 collection
Community Prints Add your picture
Be the first to share a picture of this printed object
0 comments

Column base from the entrance of a Palace

The Hittites were an Ancient Anatolian people who established an empire centered on Hattusa in north-central Anatolia around 1600 BC. This empire reached its height during the mid-14th century BC under Suppiluliuma I, when it encompassed an area that included most of Anatolia as well as parts of the northern Levant and Upper Mesopotamia. Between the 15th and 13th centuries BC the Hittite Empire came into conflict with the Egyptian Empire, Middle Assyrian Empire and the empire of the Mitanni for control of the Near East. The Assyrians eventually emerged as the dominant power and annexed much of the Hittite empire, while the remainder was sacked by Phrygian newcomers to the region. After c. 1180 BC, during the Bronze Age collapse, the Hittites splintered into several independent "Neo-Hittite" city-states, some of which survived until the 8th century BC before succumbing to the Neo-Assyrian Empire. 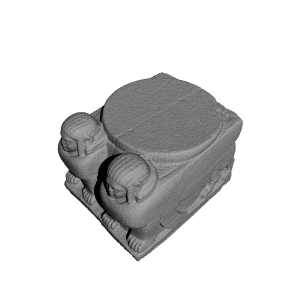