3D
Scan The World
1,837 views 77 downloads
Community Prints Add your picture
Be the first to share a picture of this printed object
0 comments

This double sphinx column dating back from the 8th century BC, is on display at the Pergamon Museum in Berlin. It was created by the Sam’al colony founded in the 18th century BC which became part of the Hittite Empire. Sam’al is located in modern day Turkey which was excavated during the 19th and 20th centuries. The basalt column bases were at the entrance of the Palace of Zincirli which was within the ancient walled city. 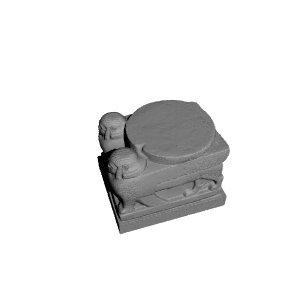