The Nymphs of the Seine and Vase of Troyes

The Nymphs of the Seine and Vase of Troyes

This 144cm tall ornate vase was commissioned to decorate the Paris EXPO (Universal Exhibition) of 1900, though this particular model was cast in 1904 to be installed at the Cours-la-Reine. Two artists took to the work under the authorship of the Manufacture Nationale de Sèvres, one of the principal European porcelain manufacturies. Sculptor Alfred Boucher (1850-1934, an example of his other work can be downloaded here) designed the three figurative nymphs. Ceramicist Alexandre Sandier designed the surmounting vase and realised the piece in ceramic and Alexander Dubois mass-produced it. 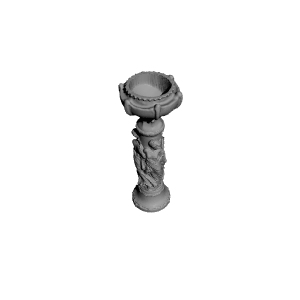 ×
3 collections where you can find The Nymphs of the Seine and Vase of Troyes by Scan The World
×
Angel Spy
@Angel Spy
1
Printed on: Prusa i3 MK2 Kit
Material: PLA
Posted at: 27th August 2017

could be nice candle holder if it wasnt made with pla :)