3D
5,001 views 432 downloads
6 collections
Community Prints Add your picture
Be the first to share a picture of this printed object
0 comments

I've always been interested in archery and it's always been something of a minor niggle that I never found the time to get round to doing it properly.  But I still have the interest, so as a tribute to the world of archery here's a pendant for the archer in your life.  It features a compound bow with arrow already nocked and ready to shoot.  I know it won't hang straight but it's not always good to be symmetrical, and my OCD wouldn't allow me to draw a bow incorrectly just so it'll hang straight.

Now all you archers out there are probably saying one of two things (or maybe both of them); 1) the strings aren't strung correctly, and/or 2) that's not an arrow, it's a harpoon!!  Well, 1) I'm an artist not an archer and since it's not actually going to SHOOT that arrow it doesn't really make a lot of difference, and 2) if I made the arrow the correct width it would be as thick as the bow strings, so don't be so picky.

I have this niggling suspicion this is going to have to be printed on an STR or very high resolution printer.  Not really sure why...

This design is also available to be ordered from my Shapeways store in a variety of different materials - https://www.shapeways.com/shops/enterprisexddesign.  Order yours today! 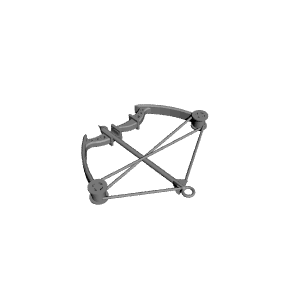 ×
6 collections where you can find Compound Bow Pendant by EnterpriseXDDesign