3D
Scan The World
2,259 views 171 downloads
2 collections
Community Prints Add your picture
Be the first to share a picture of this printed object
0 comments

Dupon's representation of this bird well-known for its very broad wings emphasizes the majesty of the animal. The condor is shown in a position of power, his wings slightly opened beneath him. There is something of a reference to royalty, posing as a king on a throne and opening its arms to its subjects. The skull of an animal at the bottom of the rock highlights its fearsome aspect. 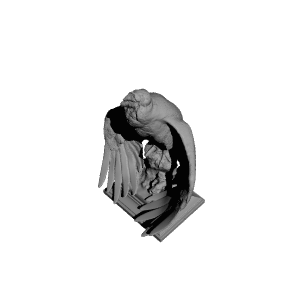 ×
2 collections where you can find Condor by Scan The World